In El Ejido, how would you like your house to be? 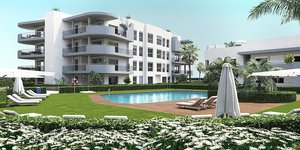 El Ejido is located to the east of Almería in Spain. It consists of a community with a surface area of 227000000 m², and has a high population density.

El Ejido has a very good access to the telecommunication network, which is distinctly evolved for those who wish to be able to communicate via ADSL and/or fibre optic.

The unemployment rate in {{object.nombre} is low, therefore it is a suitable place to settle in and seek employment. Please note that these figures are not consistent as they are altered by issues that influence to a greater or lesser extent aspects such as the sectors, seasonality and the political orientation of the local government: everything has influence.

The ideal way to learn about the amount of educational centres, the type of education provided, the ages and training modes, etc. is by choosing one of the developments in the area that you are most interested in and selecting the option on the map for educational establishments: schools, universities, etc. If this information is important to you, there is no better way than discovering the convenience of each development depending on your interests.

and the months when you can enjoy more hours of sunshine are those of:

El Ejido, in addition to the above, is well known for other attributes which make up its leisure facilities, and which are:

its architectural heritage.
its cultural heritage (architecture, archaeology and/or history).
its tranquillity.
its popular festivals.
and its gastronomy.

The crime rate that is provided is an unreliable factor, but it gives a general idea of the safety of El Ejido. The information provided is regarding criminal offences per number of inhabitants and homicide rates.
The reference data provided is of the country, and is a 0.7.
Read more

0.0
on 5
Education
Health
Cleaning
Transport
Security
n° 2in the ranking of the best rated areas to live in Spain